Mass Rohingya influx: MJF’s Role
Manusher Jonno Foundation (MJF) has started its work to collect emergency aid for Rohingyas. MJF is seeking humanitarian assistance from different institutions and persons for helping massive number of Rohingyas pouring in from Myanmar due to ethnic cleansing inflicted upon them. MJF partner NGO in Cox’s Bazaar, Coast Trust, has already started distributing relief materials since last week of August.
More than 350,000 Rohingya refugees have fled ethnic cleansing from Myanmar and entered into Bangladesh. The Myanmar army and locals have targeted the Rohingyas, a Muslim minority, by burning their villages down, looting, torturing and killing civilians. Thousands have crossed over to Bangladesh without belongings, clothes, or a place to stay. 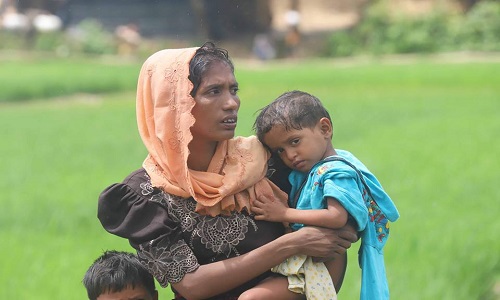 Though different Aid agencies and countries already have committed to giving aid, it will take time and the amount of aid ne eeded has not yet arrived. The refugees need emergency medical supplies, food, clean water and sanitary items for women. So, several local organizations have teamed up to provide immediate relief for the Rohingyas.
MJF a non-government organization, funded by UK Aid and other international funding agencies, has started working for the Rohingya people. MJF’s programs support marginalized communities of society, such as religious and ethnic minorities, sex workers and victims of violence. Currently, MJF in collaboration with other NGOs is acting as a fundraiser to provide emergency supplies to Rohingya Refugees in Bangladesh.
MJF’s Executive Director Shaheen Anam and Director Shamim Imam have already visited the areas, where the homeless Rohingyas have taken shelter in Teknaf and adjacent areas of Cox’s Bazaar and Bandarban. Another team is going to visit the areas this week. However, coordination with local NGOs is going on to continue supporting the helpless Rohingyas.
After coming back from the spot Shaheen Anam wrote, “Going into Ukhia amidst its scenic beauty, what I witnessed reminded me of the many movies we have seen of mass exodus of people fleeing persecution, the Nazi extermination of Jews and the more recent plight of the Syrian refugees. Streams of people walking or sitting by the roadside with expressions of utter despair, tragedy and loss written on their faces. Women recounted how their children were killed while running; some talked of husbands or brothers taken away never to return; some just kept quiet, too numb, hungry and traumatized to speak. Who can forget the horrific photo of the half burnt body of a child barely alive in The Daily Star a few days ago?”
She added, “The camp at Balukhali where thousands have taken refuge is nothing more than filthy, muddy pieces of land where thousands have taken shelter in makeshift tents comprised of thin plastic sheets slung over two bamboo poles. I saw several women holding babies, their eyes vacant, too weak to even ask for help. Children crying in hunger, burning with fever sitting on the muddy ground or lying listless in their mother’s arms. As the Coast Trust van arrived with packets of cooked food, thousands ran towards it, extending their hands; those strong enough got them, the weak ones looked on helplessly. Some said they would take this packet to their families and share with five or six or even 10 members.”
MJF along with others think mass Rohingya influx is a huge humanitarian catastrophe in Bangladesh, one we have never faced before. Already hosting some 500,000 Rohingyas for the last 20 years, we are ill-equipped to take in anymore. Yet, we have opened our doors to them, what else could we do? Now it is the turn of the international community to come good on their values of fundamental human rights and dignity for everyone.
Photo : The Daily Star 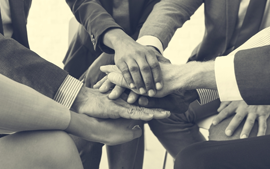 Get involved with MJF